The founder of the Mali Empire was Mandika Sundiata Keita, who in 1235, from his small state of Kangaba, unified a vast region, which was already part of the rich lands of Niger and its gold mines. Around the year 1300, Mali was a confederation of 3 allied states (Mali, Mema and Wagadou) and 12 provinces. Its major commercial cities, Djenné and Tombuctú, enriched, leading them to control almost all the trans-saharan transactions for salt, gold and other goods up until the decline of the empire, which arrived the rebellion of the vassal provinces in the end of the XIV century, culminating with the conquest of Djenné by the Songhai in 1471.

The zone was later colonized. The French explorer, René Caillé arrived at Tombuctú in 1828, beginning the first military campaigns in 1878.

The first steps toward sovereignty took place in 1946, with the Territorial Assembly election, who had the right to send their representatives to the French Parliament. During the next decades, Mali continued working towards their independence up until September 22, 1960 when they declared themselves the Republic of Maliunder the presidency of Modibo Keita.

In November of 1968, a coup put lieutenant Moussa Traoré in power, who established a military dictatorship with a single political party, the DUMP (Democratic Union of Malian People). The resistance against facilitating a transition to democracy by General Traoré generated a growing discontent from the political and student class since 1989. The bloody and massive demonstrations led to a coup on March 24, 1991, led by Colonel Amadou Toumani Traoré, who, in front of the Transition Committee for the Popular Salvation, set the foundation for the democratic transition of the country.

The democratic transition made way for the constitution on January 12, 1992, in that moment more than 40 political parties were legalized and a multi party system was established. The legislative elections of March 1992 resulted in the winning of ADEMA (Alliance for Democracy in Mali), and the April presidential elections in the same year resulted in the winning of the presidential candidate of the same political party, Alpha Oumar Konaré.

The government system of Mali is semi-presidential, where the President of the Republic names the Prime Minister and has the power to dissolve the Nation Assembly (147 seats).

The current political situation in Mali is highly unstable since 2012, when two scenarios exist:

On the one hand, Bamako finds itself in a false consolidation of the democracy incited by the presidential elections in 2013 after the March 2012 coup.

On the other hand, asymmetric terrorist attacks in the northern part of the country against the United Nations and the Armed Forces of Mali (FAMa) took place, along with additional confrontations among fractions of different armed groups. 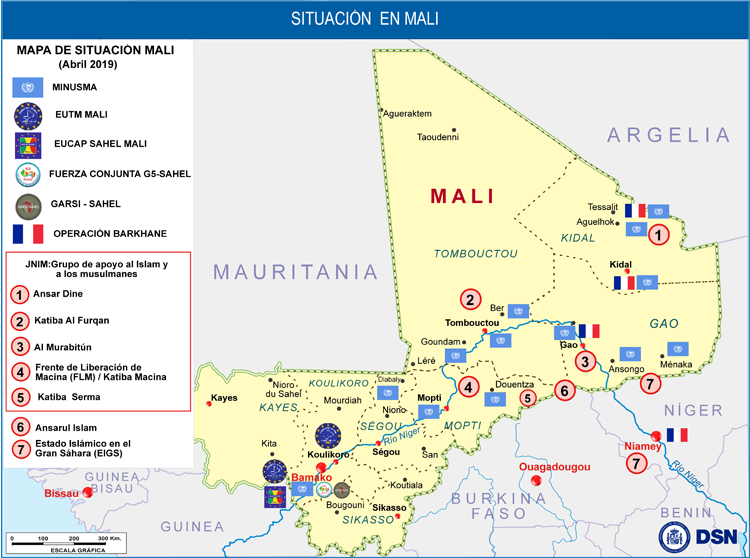 The last elections in Mali were parliamentary and the first round was held on March 29 and the second on April 19, 2020. These elections have been marked by low participation,  which was less than 35%, and due to the high insecurity in the country.

One of the reasons that explains the low participation has been the increase in infections by Covid-19. According to US News, authorities in Mali promised to take extra steps to ensure that voting practices were hygienic. However, the measures arrived at the voting centers late. Several voting centers were forced to close during the election period due to jihadist attacks. According to Al Jazeera, in the second round, 13 citizens of Mali had died from COVID-19 and 200 cases had been registered.

The results were published on May 1st, announcing the win of the party of President Ibrahim Boubacar Keita. Several Malians were unhappy with the results, criticizing the mismanagement of the President in economic matters, terrorism, electoral corruption, among others. As well as the case of the main opposition leader, Soumaïla Cissé, who was kidnapped a few days before the first round of the elections.

Protests on the streets of Bamako and in the rest of the country began immediately after the election results were announced. The most notable protest was that of the June 5 Movement, in which opposition parties rallied against President Keita and his government. Several protesters called for the resignation of the President and the establishment of a transitional government.

In August, a group of soldiers staged a coup, forcing the resignation of President Keita. With the coup, the special missions of the European Union and ECOWAS sent to Mali have been suspended. The de facto leader in Mali is Colonel Assimi Goita, president of the National Committee for the Salvation of the People. Goita fought against the Tuareg rebels and was arrested by the National Movement for the Liberation of Azawad (MNLA) in 2012. In 2019, he fought against the jihadists.

Election Observation Mission of the European Union in Mali

The European Union conducts electoral observation missions to promote democracy, human rights and law throughout the world. This activity contributes to:

Below we can see the reports of the EU electoral missions in Mali. These reports describe the conditions under which the elections of July and August 2018 and 2013 were held and provide an analysis of their results.